Using the Correct Fork Matters to Me 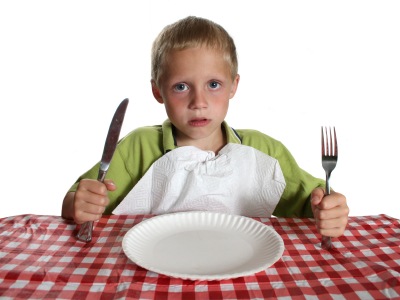 Using the Correct Fork Matters to Me

Last night my husband and I were kid free and decided to head out to a nice little local restaurant for a simple dinner.  This little Italian bistro is not fancy but they home make the pasta and the owners are good people and part of our community, so I love to support their place. We were seated in the back of the restaurant with a view of all the action at the tables, bar and kitchen, kind of a fun spot to be. Last night as I looked around I was appalled by the table manners of my fellow diners, it was distracting. Miss Manners would have dropped dead on the spot it was so bad. There were a few tables that were almost offensive to watch.

It all started with a table next to us a family with two preteen girls, one teenage boy and both parents. I first noticed them because the mother was explaining in excruciating detail to the waitress the changes that would need to be made to the meals to accommodate her children.  The son, who was slumping over his cell phone with a baseball cap on, would only eat a plain lettuce salad with ranch dressing and he would have an adult size order of pasta with plain butter like on the kids menu. The daughters had the same salad requirements and the mother ordered them mac and cheese.  Ok, can we say not exactly adventurous eaters? 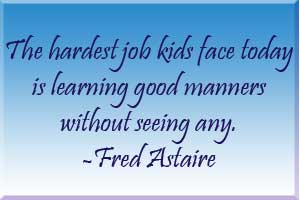 Do you think this mother makes a kid meal and an adult meal when she cooks at home? I think she does, and I think she is doing a disservice to her kids doing that. If we fed our kids real food then we would not need to have laws like those in New York City against giant vats of soda and trans-fats. Kids would learn to eat real food and understand the difference. Nuking chicken nuggets for a 3-4 year old may do more to ensure that he becomes a fat 30-40 year than anything else we do. Burning out our taste buds and metabolisms on foods loaded with salt, fat, preservatives and additives as children is killing us as adults. If our children were included in cooking and eating real food at home they might also learn to cherish the act of dining both at home and in a restaurant. Part of the reverence shown to good food is good manners.

That brings us back to our family of five…the food came and then the real horror show began. First bread arrived; the family was like locust descending upon the plate, no passing of the serving platter or deferring to the parents, it was every man woman and child for themselves.  The son (he was seated closest to me so his was under the microscope) hat sill on head cell phone propped on his plate proceeded to clunk his elbows on to the table top, hunch over and gnaw on large slabs of bread like they were slices of water melon and he was on a picnic. It was reminiscent of seeing prison inmates on a CNN documentary eat. The arrival of the salad was not much better, the father, son, and daughters all had no concept of how to hold a knife or fork.  I believe my mother would have called it the “truck driver method” no offense to truck drivers, but I don’t know what else to call it. The mother while she did know how to use her utensils she had a talking with her mouth full issue, gross. This family was dining in a casual restaurant, but this is a well healed upper middle class neighborhood and they were easily spending $150-$200 for the experience, they should know better. I was saddened to see these kinds of poor manners foisted on the general public who were also paying to eat in the establishment.

Our family of five was far from the only offenders, I counted 4 other men/boys in the restaurant with baseball caps on, didn’t their mother teach them to take off a hat at the dinner table. I also watched a young couple on a date with such bad table manners that I could not imagine how they would ever be able to find the other attractive after watching each other scarf down a meal. Isn’t it still common courtesy to sit at a table without propping yourself up on your elbows and hovering over your plate to shove in huge mouthfuls of food? I saw almost no men opening doors, pulling out chairs or standing when the women at their tables came and went. It was disheartening to watch as many tables opted to stare at cell phones over having conversations with each other.  Isn’t one reason people give for dining out is that it is enjoyable, a chance to see each other, converse and catch up?  My mistake that is what we use Facebook for today.

I had about given up on the whole place when a couple on the far side of the room caught my eye. This couple was relaxed, happy and enjoying a bottle of wine, had lovely manners and honestly what looked like a great deal of joy de vivre.  I first took notice of them when the gentleman was careful to fill his companions wine glass before his own.  They looked like fun people. They were chatting, laughing, and even occasionally touching each other to emphasize a point in conversation. The gentleman offered the bread plate, they both ate with lovely table manners nothing stiff or unnatural just the same stuff that I though every mother taught their children, like how to use a knife properly. I never saw a cell phone on the table and he even opened the door to the restaurant on their way out. They weren’t the best dressed or driving the fanciest car in the lot but they were the ones with the most class. 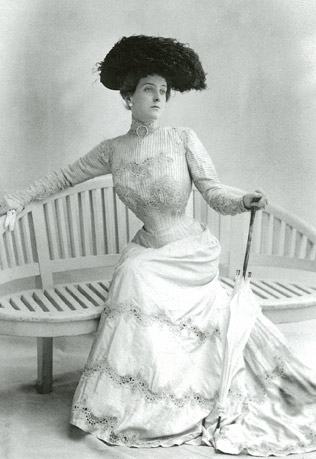 Emily Post’s name is synonymous with good manners. More than half a century after her death, her descendants continue her work at The Emily Post Institute.

I think my complaint is that the children of the family of five may someday learn good manners, but putting on a show for Aunt Martha at Christmas dinner will never translate into the effortless grace that the happy couple has. It takes practice to use a knife and fork correctly.  It takes effort to sit up straight if you are unaccustomed to it. The art of conversation is just that: an art you must practice. The thought of putting on airs for one meal is exhausting but always expecting good manners from your family is not snobbery it is an advantage you can give them in life, like a college education. I think we all know people that have missed work and social opportunities because they are ugly dinner companions. Like the girl that meets Mr. Right but he never calls because she can’t eat with enough grace that he is willing to be seen in public with her again? Do you think she would thank her mother or father for just leaving her alone at the dinner table?  Good manners are part of a civil society, impeccable manners are empowering.

Manners don’t begin and end at the dinner table. They should extend across the many facets of our lives to include everything we do. Opening a door for someone, calling any one you don’t know Sir or Ma’am, deference to elders, using please and thank you; these not are examples of putting on airs or being sexist or snobbish or old fashioned they are what civil people that are part of a community do. Perhaps it’s too much to expect this level of sophistication from everyday people when we have politicians that name call and disrespect each other, athletes that have titles for their taunting celebration dances and shows like the Jersey Shore on TV. I guess my annoyance is that respect for one’s self and others is being replaced by an attitude of estrangement that is becoming pervasive in our culture. So next time you are out and about all I ask is you sit up straight, use a napkin, open a door for someone and say please and thank you when every possible.