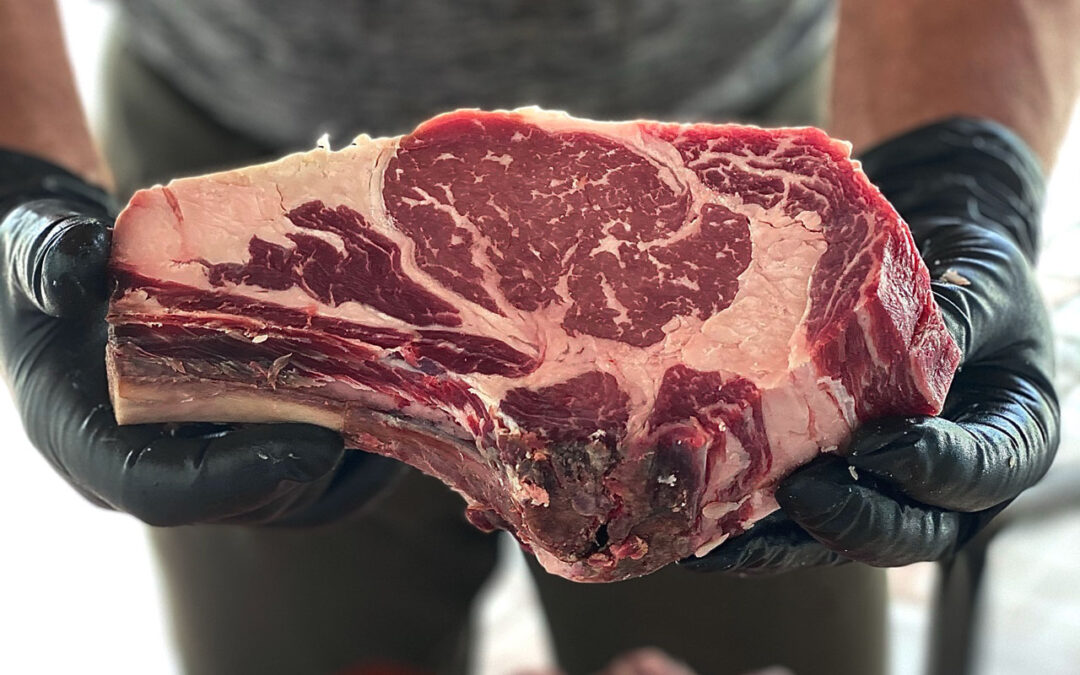 I have been dry aging beef all wrong. The best way is to have a friend with a walk-in cooler devoted to his meat curing and processing. Yep meet my friend Bill. He’s one of those guys that has everything. From a pizza oven to a commercial deep fryer, this guys got it all, including a walk-in cooler devoted to curing and fermenting. He kindly kept my most recent dry-aged beef project in his cooler for an astonishing 60 days.

When we got it back, the meat was very different from the dry age beef in this post that I only did for about two weeks. That prime rib was a lot funky. Still a bit moist and very stinky. This one was very dry on the outside, and the smell was far less funky. It was more like a strong cheese or ripening prosciutto still in the cave. It was almost pleasant. It all has to do with what bacteria is growing when on the outside of your meat. Fermentation is super cool. It’s science, and I love playing with it.

I kept the bones on, but you could cut them away. I decided to try out J. Kenji López-Alt’s super low and slow cooking method. He tells you to cook the rib roast for 5.5 hours and 150 degrees in the oven with just salt and pepper. I don’t think my oven was really up for the task. Let me explain why. Holding a low temperature consistently is not really what a home oven is made for. The way it works is it heats up by flipping the element on. Then the thermostat turns the element off. The oven cools, and the process starts over. Element on. Element off. Temp goes up and temp goes down. So, unfortunately, I did not end up with the perfect pink to the edge prime rib that Kenji’s system promises. Don’t get me wrong, it still tasted awesome.

Those badass Anova precision ovens can hold low temps perfectly. If Anova wants to send this lowly food blogger one, I’d love to have it. HaHa! Maybe I’ll try asking Santa. In the meantime, I will use my sous vide stick to cook my sixty-day dry aged steaks. After the sous vide bath, I’ll finish the steaks in an iron skillet with browned butter—old school steak house style.

Kenji’s reverse sear, on the other hand, made a perfect crust. He tells you to pull the roast out to rest when it’s about 130 degrees inside. Then crank your oven to the max—five hundred degrees in my case. Next, disable the smoke alarms in your house before you pop the dry aged beef back in to crisp up for 8-10 minutes.

The crust on this prime rib was awesome. The dry, dense meat made the most flavorful crust ever. It was truly the best part. You could taste just a hint of the funk from aging like in a mild goat cheese. It was a lovely texture also. That taste of the “funk” was also present in the fat. I only put salt and a little pepper on the outside. All that extra flavor was from the aging process.

When you use the low and slow cooking system, you will not get drippings: no Yorkshire pudding or mushroom gravy. Your roasting pan will be dry.

I can’t wait to turn the leftovers into pho. Yep that’s right prime rib pho. I will char up the bones to add to my stock and then thinly slice the leftover meat to top my noodle soup.  Yummy.

I hope you enjoy the pictures from this post. I shot them all on my iPhone. How cool is that! 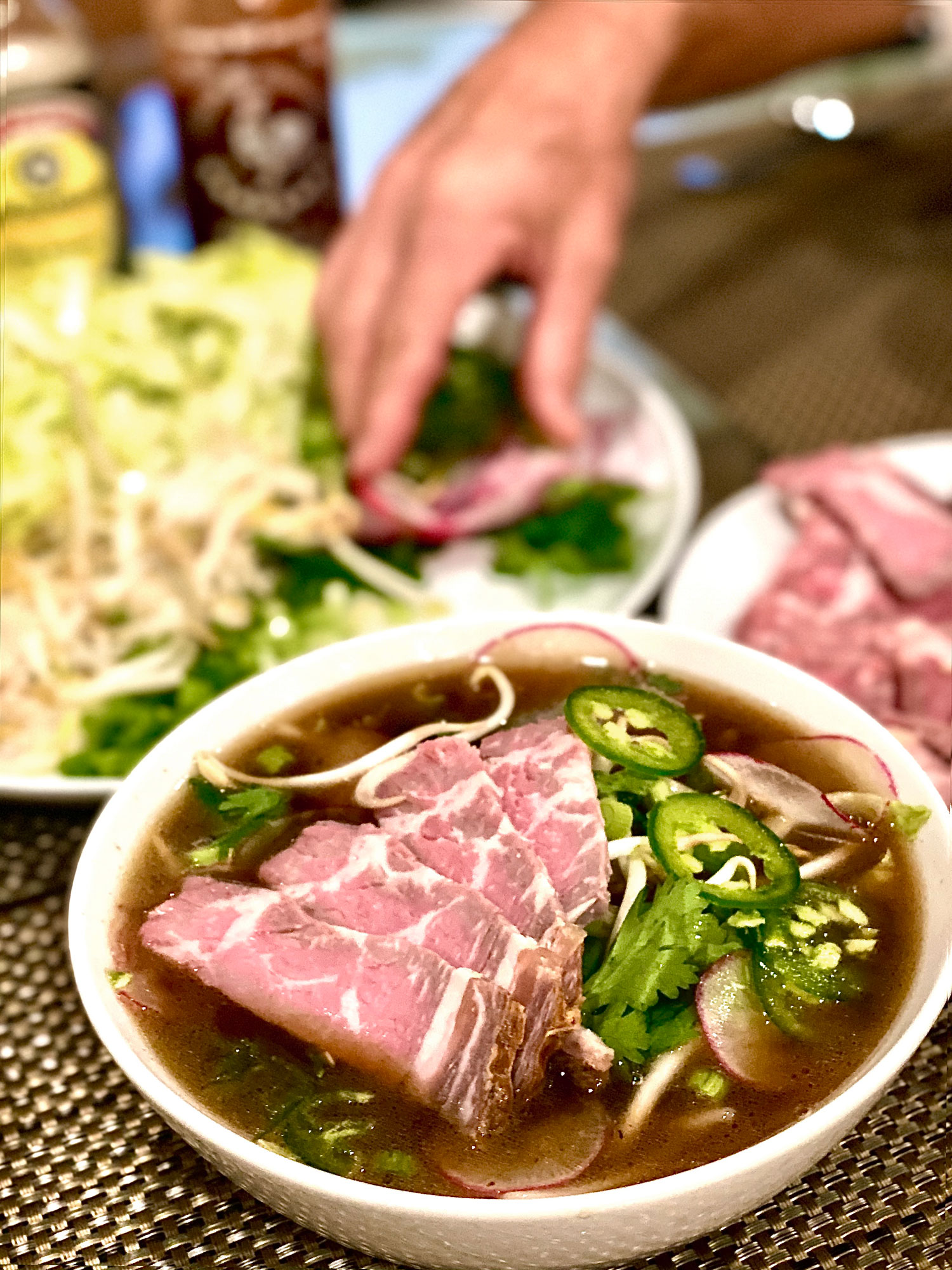 Leftover aged beef pho, I use this recipe from The Kitchn.com with a few tweeks of my own. 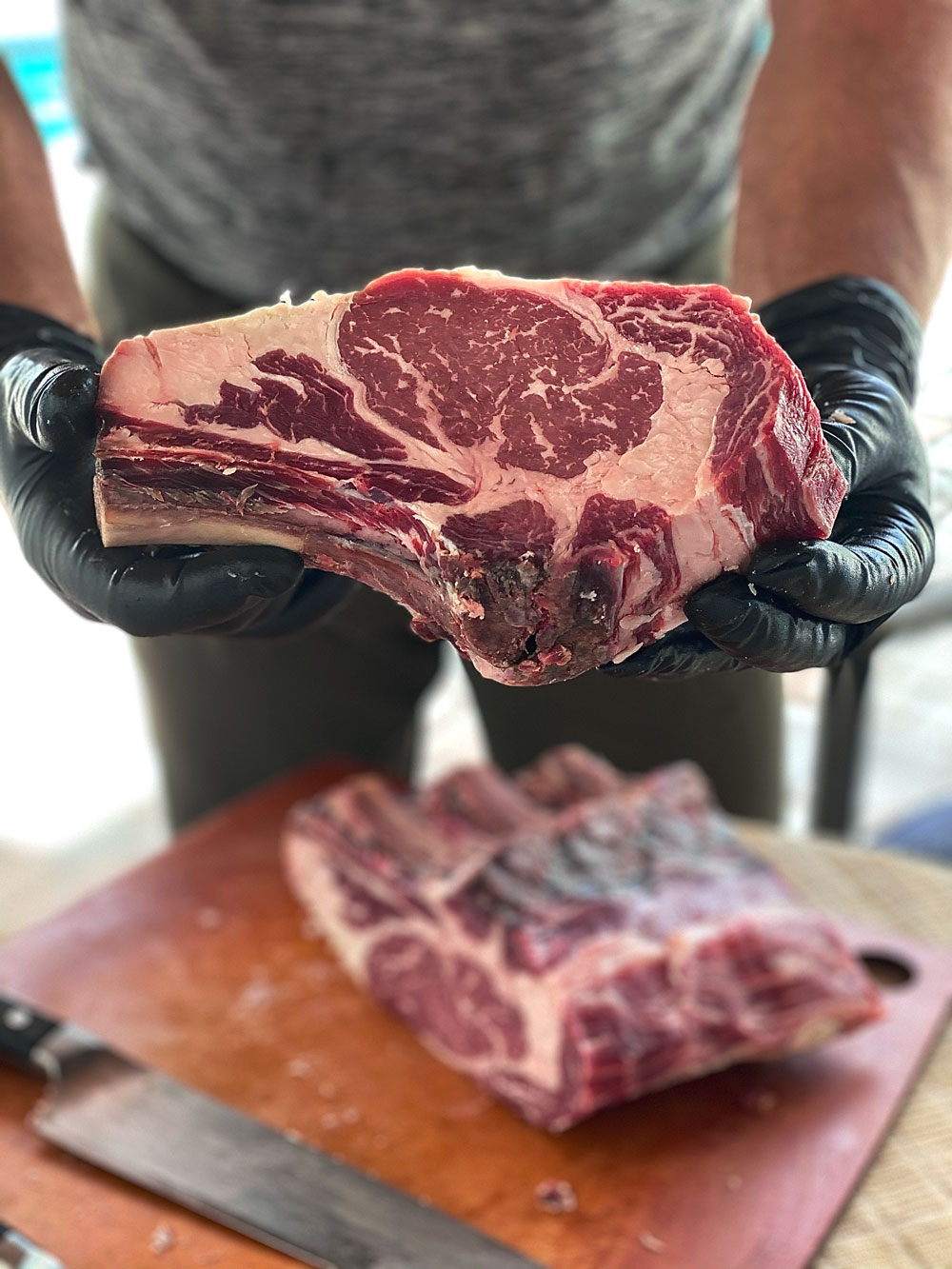 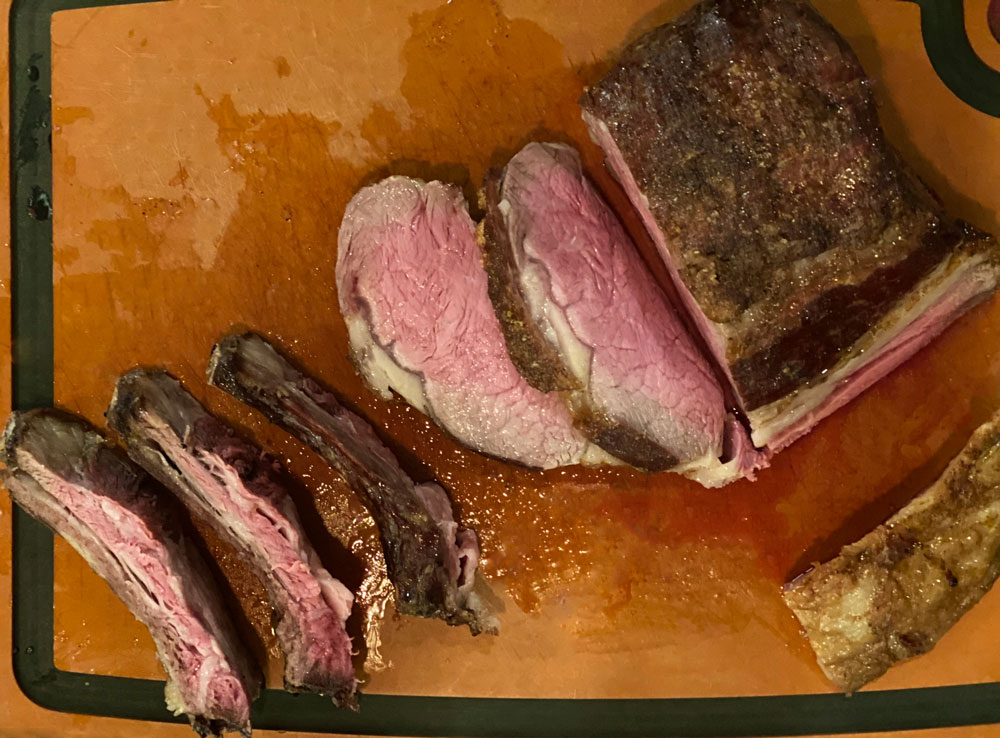